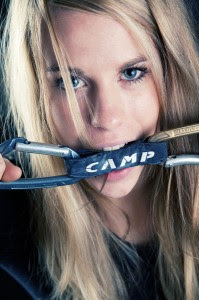 My name is Maja Vidmar. I am 22 years old and I live in Škofja Loka since the day I was born. I was a little girl when I started to practice different sports. After jumping from one sport to another I found climbing. I was 12 years old at the time when I started to visit climbing school in my hometown. I liked the sport immediately and after a few months Roman Krajnik, started to train me. This is how my climbing career started. The first year (1998) I competed in national competitions in youth categories and even end up second on one of them. After that my results and my climbing only got better.

After two years in 2000, I started to compete in European youth cup with the Slovenian youth team. My first year was surprisingly successful. I became the winner of the European youth cup in the youngest category. That was a big encouragement for me to continue working hard with my coach, who saw some potential in me since the beginning.

After finishing prime school I went to high school and learned for graphic designer. I was always interested in designing but climbing had and still has the first place in my life.

When I was old enough I started to compete in world cups. That was a big challenge for me. I always liked competing, meeting new places and people. On my second world cup in 2002 I made it to the final and on the next in l’Aprica I climbed even better and did my best result with amazing second place.

From that point my climbing career only went up. In world cup I made it few times to the podium and in 2003 I was second on the youth world championship. For those two years I was competing and getting some important experiences. And then the year 2005 came. I didn’t only felt strong physically but also mentally. In Shanghai I won a world cup for the first time. Apart from that big victory I was standing on the podium five more times and finished second in overall world cup ranking. I like competing in world cup but I especially enjoy climbing in Serre Chevalier and Rock Master in Arco. On both masters I have already stood on the podium, but winning is still a big challenge for me.

In a season 2006 I realized my most important goal when I came back from European Championship, which took place in Ekaterinburg, with bronze medal. Besides that I won my favorite competition in Kranj.

Then the amazing year 2007came. It didn’t start very good, but after first winning on World Cup in Chamonix I was climbing in that style till the end of the season. I won six World Cups in a row, which brought me a title of the World Cup winner 2007. In this amazing year the World Championship in Aviles (Spain) also took place. I realized my big goal by reaching bronze medal. All those achievements were also recognized by Slovenian public. I was proclaimed as a second best sportsman in Slovenia for the year 2007. Beside that I won the Lasportiva competition award on Arco Rock Legend awards.

Even though I achieved so much in 2007, I had big expectations for the new coming season; there were still many goals in my head. Everything turned around when I injured my finger during training. I had to rest for 3 months and at that time I thought my season was lost. But when I started to train again I was full of energy and I was so motivated to come back. At the end this season was very successful for me. I was second in the European Championship in Paris and I was also second in the overall world cup for the year 2008.

Beside competitions I really like climbing outdoors. Every year, I visit some climbing places in abroad where I mostly climb on sight. I on sighted many 8a – s and some 8a+ -es. Apart from that I like to work on hard routes as well. I already climbed 3 routes graded 8c, which is quite an accomplishment for a girl.

This is shortly written my climbing career so far, but it’s not going toward the end yet. I still have a lot of goals and dreams to realize.

Because of climbing I don’t have much time to do other things. Luckily I am employed in Slovenian armed forces. My life is all about climbing at the moment and I hope it will stay like this for some more time. After that I will see where it will take me.